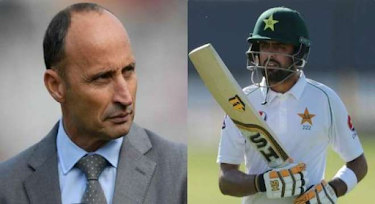 Lahore the latest newspaper. November 5, 2020, Former England captain Nasir Hussain says that Pakistani white-ball captain Babar Azam has difficulty in playing balls falling off the stumps. In an interview, 52-year-old Nasir Hussain said that Babar Azam needs to perform in all conditions to become the best batsman in the world. Babar Azam has difficulty in playing balls outside the off stump like England. Virat Kohli was encountered on the first tour.

He further said that Babar Azam is the best player but in batting, it is not only seen how many runs you have scored but also how you have scored these runs. When Babar Azam is batting well, he It’s fun to watch, if he wants to be remembered as a great player, he has to make sure he scores in all conditions and takes full advantage of his form.

Nasir Hussain further said that Babar Azam has all the talents that a great player has, he is one of the best players in ODI cricket and is also ranked second in the T20 format, against England. His performance in the recent Test series was also good because it is not easy to score any batsman in England, now he just needs to show consistency in Test cricket like Virat Kohli.

Nasir Hussain further said that Babar Azam has been in good form in Test cricket for the last 6-9 months and now he needs long-term consistency. Babar Azam is in the International Cricket Council’s (ICC) rankings for the top five batsmen in T20, ODI, and Test cricket.